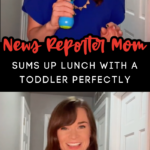 This journalist mom hilariously recaps an Olive Garden lunch with her two-year-old son, and I think parents everywhere can relate!

Kayla Sullivan, who obviously knows what she’s doing in the journalism business, has your typical two-year-old. She took him to the Olive Garden, and sure enough, tantrums ensued.

As a parent, you sometimes want to go out and have lunch normally. But, let’s face it, having lunch with a toddler is NEVER normal. This often leads to a crying plea – from the parent. You want to do whatever it takes to stop the embarrassment. The thrown food, the loud screams, the stares of people around you. It can be a lesson in humility. An extremely humbling lesson.

But, she took the opportunity to put her reporting skills to good use and she wrapped it all up. She was both flawless and perfect. LOL!

Kayla Sullivan is reporting live from outside my son’s bedroom where he is currently being held until after nap.

She is seen standing in the hallway, presumably outside her son’s bedroom. As if on television, she holds a microphone while reporting. Only THIS is one of those plastic microphones that every kid has hung – usually on the floor – in their room.

Now this story involves a minor so I can’t give specifics but what I can confirm is that my son is a 2 year old terrorist who held me hostage at the Olive Garden earlier during the day.

Kayla delves into the completely relatable story of meeting her friends for lunch at the Olive Garden. She was prepared. She brought an arsenal of emergency treats to soothe and subdue the child.

This is an active investigation, but authorities believe appropriate precautions have been taken. I brought my son’s favorite snacks and even risked judgment from other moms by bringing an iPad. But not even Cocomelon could have stopped this collapse.

Poor Kayla. The friends she was meeting for lunch had no children. So there’s no way they can really appreciate how much fun it can be to bring a two-year-old to lunch.

It is important to note that the friends I met there do not have children and probably never will after witnessing this situation.

It’s better. As any parent knows, the harder you try to stop a two-year-old’s tantrum, the worse it can get.

After several shouts of demanding, quote-unquote, ‘chet-chup’, a Good Samaritan waitress miraculously figured it out as the English word ketchup and brought him a bottle,” Sullivan continues in the TikTok video. “Unfortunately, his good deed was later punished after he threw a ketchup-covered fork at him. Not all heroes wear capes, but this one should have worn an apron.

The whole thing is so funny, because it could – and probably already has – happen to anyone with a two-year-old.

Kayla is even giving a shout out to all those parents trying out the “soft parenting” trend.

May God help us all. Haha!!

You can see the whole hilarious video from TikTok Right here.

10 months ago Eddie A. Tirado

10 months ago Eddie A. Tirado

11 months ago Eddie A. Tirado